As the most elegant witch, Black Cat usually doesn't like to dress herself in casual style, not to mention swimsuits. However, Jack is so eager to see Black Cat to wear swimsuits. He doesn't want to always see Black Cat in Gothic Lolita dress. When he takes care of Alisa & Siren, he often talk to them about his thoughts.

"Do you like to swim?"
"Sure! We like to swim, Jack!"
"Very good! Then, don't you think that you should wear swimsuits when you are going swimming?"
"Hmmm... Yes, that sounds reasonable."
"Great! So, if you two can bring the entire Black Cat to me with swimsuits on her body, we can go to swim!"
"Yes, sir!"

Black Cat of course knows their conversations (don't forget that Alisa & Siren are parts of Black Cat), but she considers those as jokes. Alisa & Siren's wish can influence her, but not significant. They are her legs after all, just the minor parts of her.

One day, Black Cat was doing the regular maintenance for her witch body and existence again. She separated her head and set it on her magical pot to analyze an act on her converted spiritual existence. Suddenly, a strange idea flashed into her mind when she was setting function of the pot. "Oops! What the... Oh, no, I made a mistake...Hey, wait, wait!" Black Cat screamed. 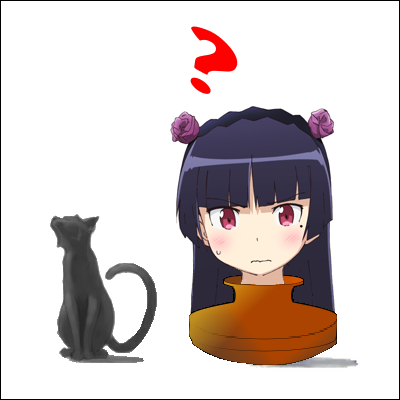 Next, Alisa & Siren emerged. They communicated with other Black Cat's components and convinced them to go to swim. Then Alisa & Siren helped others to wear the swimsuit-- they aren't as independent as Alisa & Siren are.

Finally they completed the preparation. All Black Cat's components went out to go to Jack's house. Alisa & Siren used Black Cat's magical tools to assist other parts to move, and both of they could walk on their own. 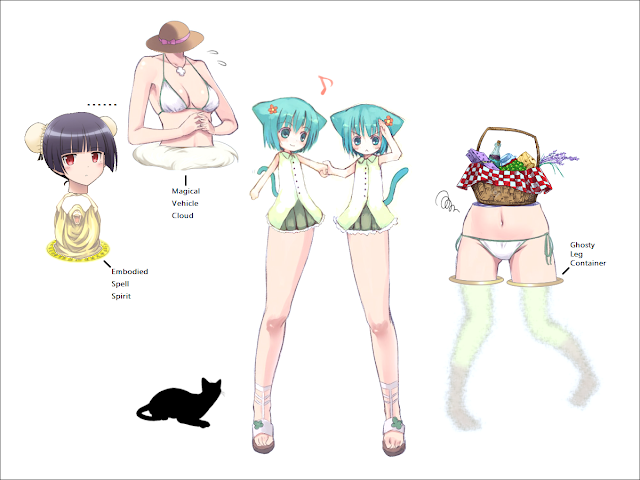 "Hi! Jack! Mission completed! Every parts of Black Cat now wear proper swimsuit! Then take us to go to beach to swim now!"
"...Well, I don't even think you can make it. But... I want to see the whole Black Cat in swimsuits, now I just see separated parts...Orz You dismembered my lovable witch!"
"Ouch... If so, maybe we can reassemble myself together, Jack?"
"Do you know how to reassemble yourself?"
"Err... No... Black Cat knows, but she was disintegrated..."
"Ha, haha, hahaha..."
張貼者： Mr. Taoyundao 於 上午2:53 4 則留言:

017d Jin Chyo-Yue: The Rebirth Of The Reformed Saint (d)

Huang Chun-Xiang and Jin Chyo-Yue, they are two, but they are actually the same one. Chyo-Yue often feels incredible about it. Sometimes she may look at her legs, which their predecessors ever walked on the land of ancient Taoyundao and finally became the legend. The feeling is so subtle and marvelous. From past to now, both pairs of legs walk on the same ground with different time coordinates. Chyo-Yue feels just like there exists the invisible connection between her legs and Chun-Xiang's legs. 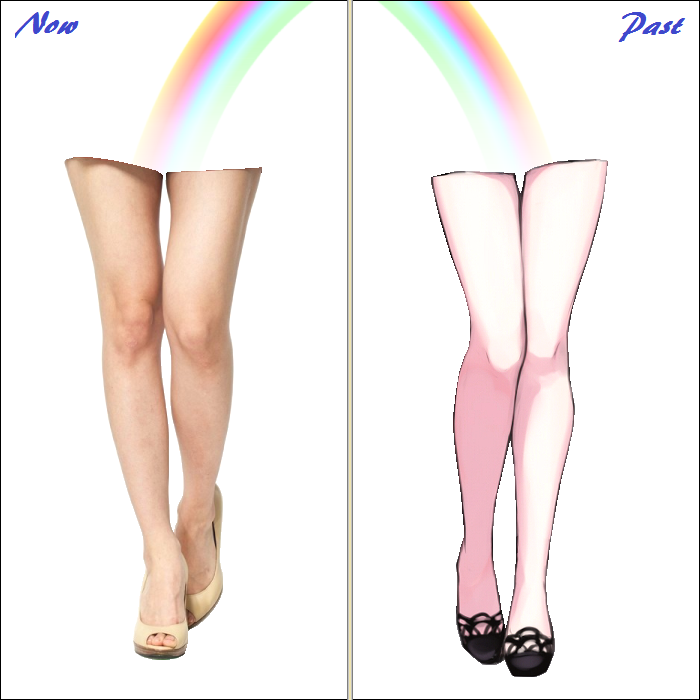 Chyo-Yue is very happy about that. She appreciates Chun-Xiang very much because she can be the one who was converted from the lady whom she respects and admires the most. However, Chyo-Yue knows everything about Chun-Xiang, she knows that Huang Chun-Xiang will thank her for continuing her vocation. 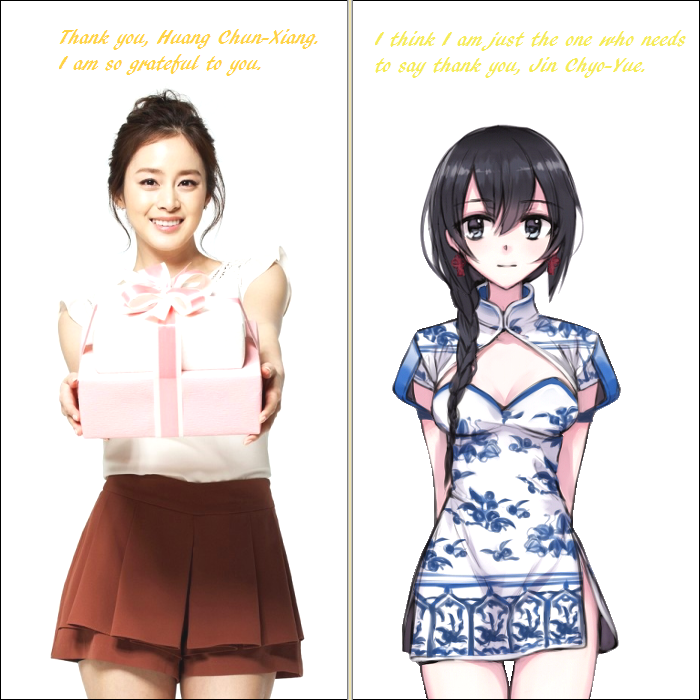 Sometimes Chyo-Yue may feel weak about difficult situations, then she will ask her another self: "If Chun-Xiang was in my shoes..." 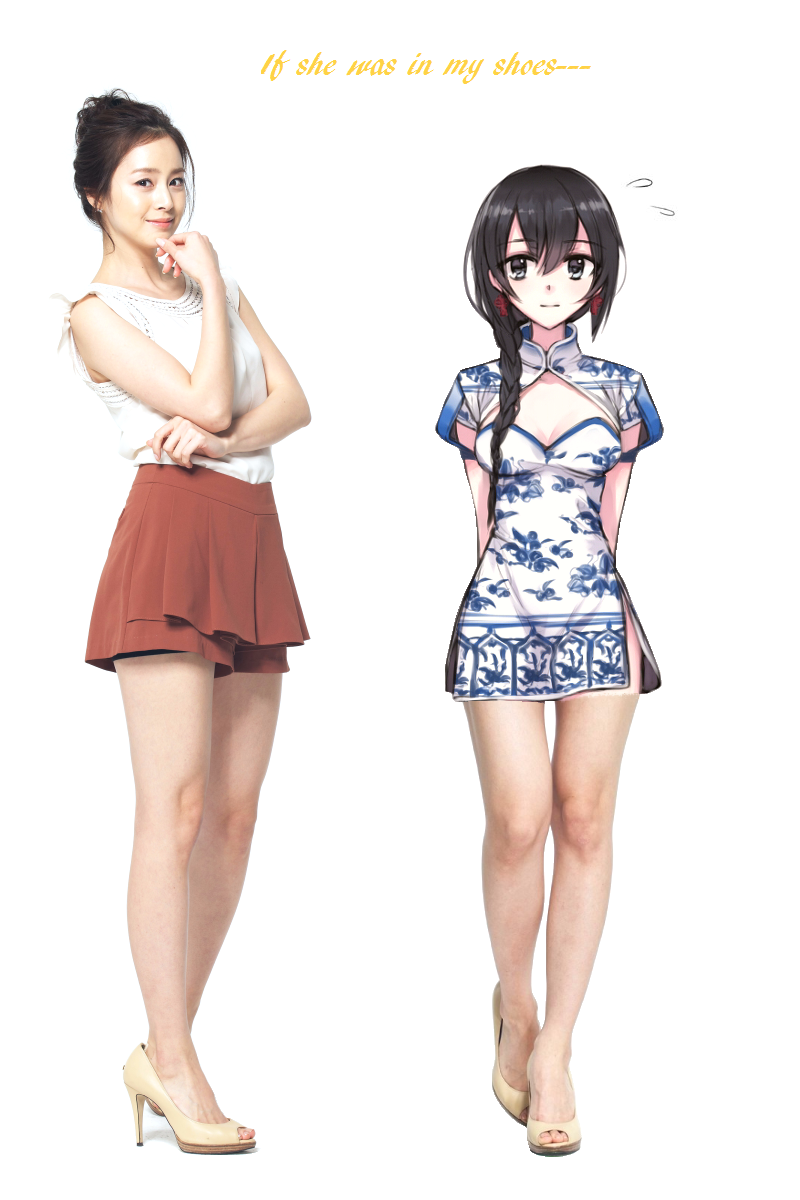 "Haha, she wasn't just in my shoes, she was also in my legs! Don't forget, we have the same pair of legs ^^"

017c Jin Chyo-Yue: The Rebirth Of The Reformed Saint (c)

She won't be "a Huang" again, such that she will not connect to the Huang components of Mei-Xian and Black Cat and influence them directly. Her new surname is Jin (金, "gold" or "golden") converted from Huang (黃, "yellow"). Her given name is Chyo-Yue (秋月, "autumn moon") converted from Chun-Xiang (春香, "spring aroma").

Similar to Chun-Xiang, Chyo-Yue also tries her best to mitigate sorrows and purify sins of those miserable surreal beings in Taoyundao. She empties her belly for containing poor souls and spirits. When they reside in Chyo-Yue's belly, they will be deemed to be Chyo-Yue's apparatuses, like the stomach, liver, or intestines. They work for Chyo-Yue's body to expiate their sins, and Chyo-Yue will shoulder their karmas. Their negative emotions and bad affections also will be sublimated by Chyo-Yue's heart. Chyo-Yue is kind and generous, she always opens herself to welcome surreal beings who need the salvation. 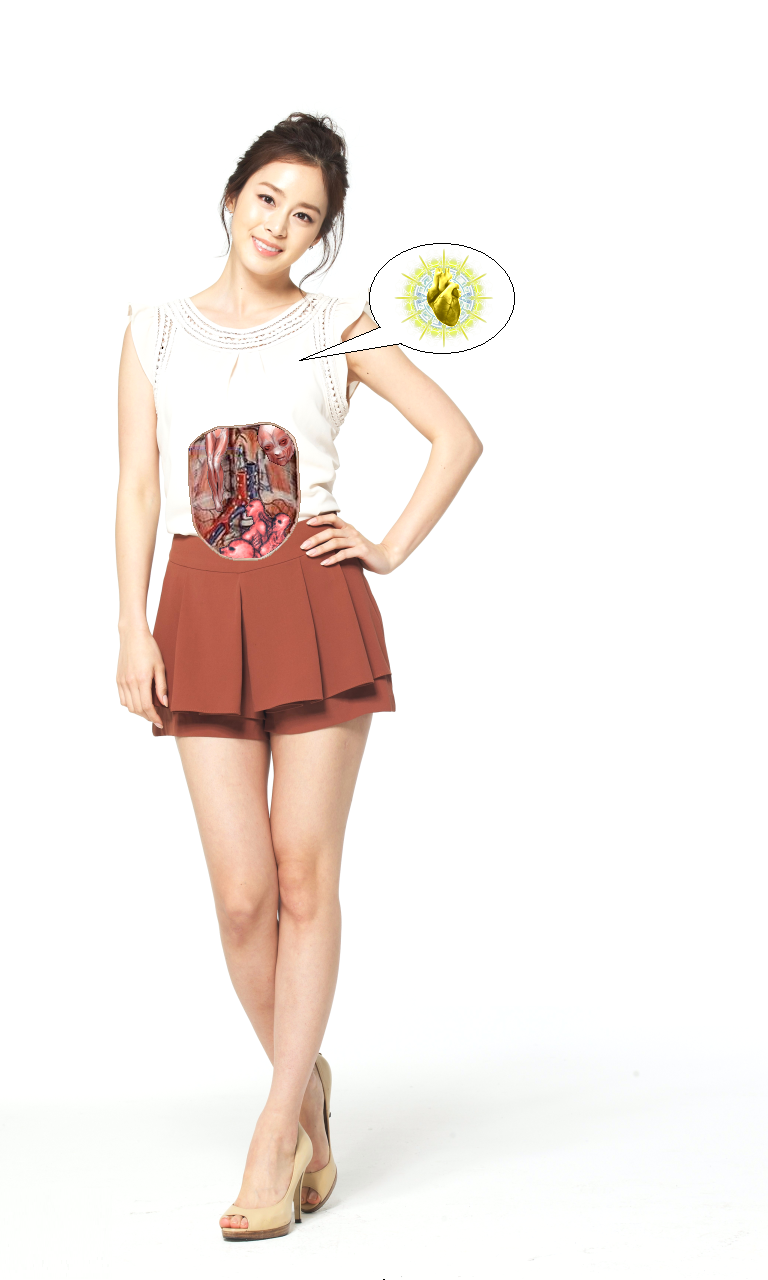 "Don't be sad alone. Please come into me. Let's try our best together."

Chyo-Yue becomes very famous among surreal beings in Taoyundao, she is viewed as the savior. One saved spirit writes an anthem for eulogizing Chyou-Yue: 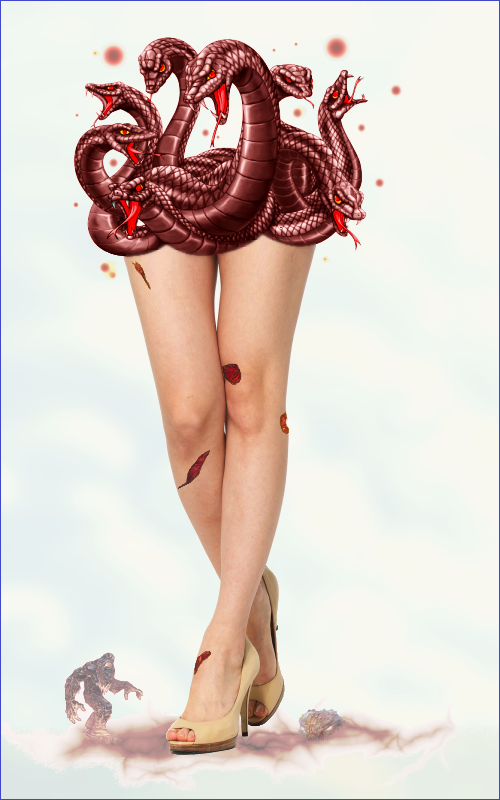 "The legs walk through the land of miseries, bear the desires and lusts and get hurt for poor souls;" 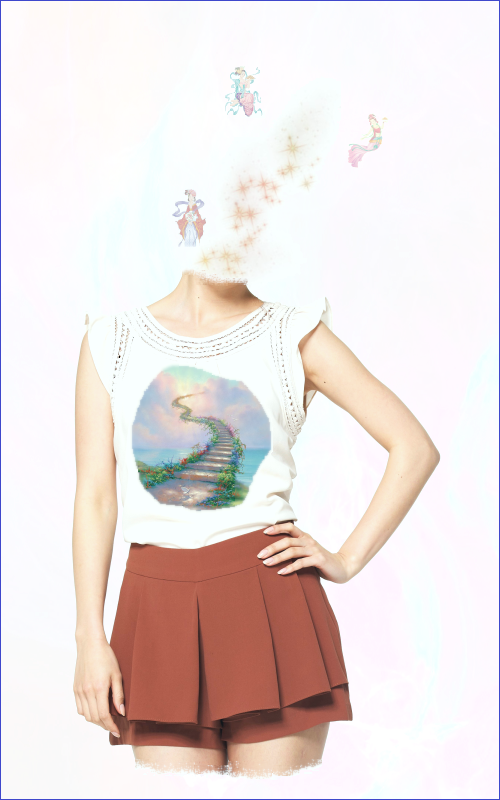 "the body accepts and comforts sinners, it's the ladder to Heaven for guilty ones;" 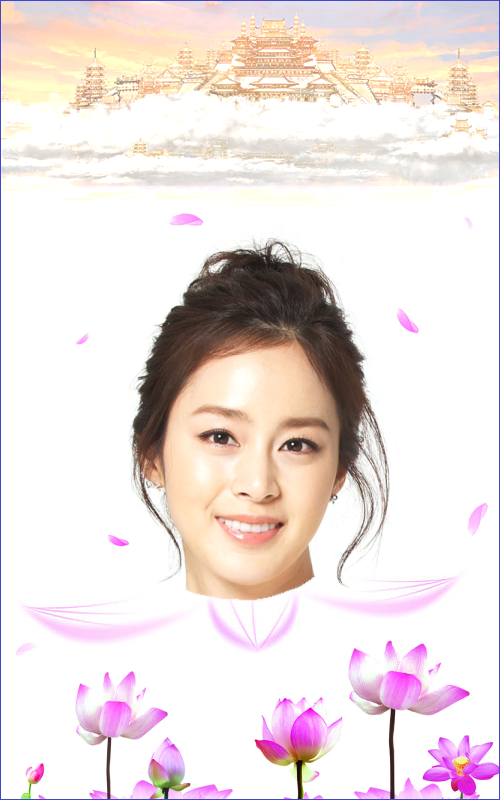 "and the face carries the most warm and gentle smile; when you see it, you're already in the Paradise!"
張貼者： Mr. Taoyundao 於 上午6:37 3 則留言:

017b Jin Chyo-Yue: The Rebirth Of The Reformed Saint (b)

Chun-Xiang's legs were reformed, such that they already weren't Chun-Xiang's legs. Let's just called them "the legs". Now the legs had to leave the temple of the Li family, let me explain it.

Huang Chun-Xiang was expelled by the Huang family once, and her surname "Huang(黃)" was ripped away. Later she met Li Yong-Chun and married him. The Li family loved Chun-Xiang and accepted her as a member of them, they gave Chun-Xiang her surname "Li(李)". When Chun-Xiang died, they enshrined Chun-Xiang in their family temple.

Since the legs weren't Chun-Xiang's legs, they couldn't be recognized as a part of the member of the Li family. Karma of the Huang family inhabited the legs and changed their properties. The legs stepped down the floating pedestal. Time to leave. 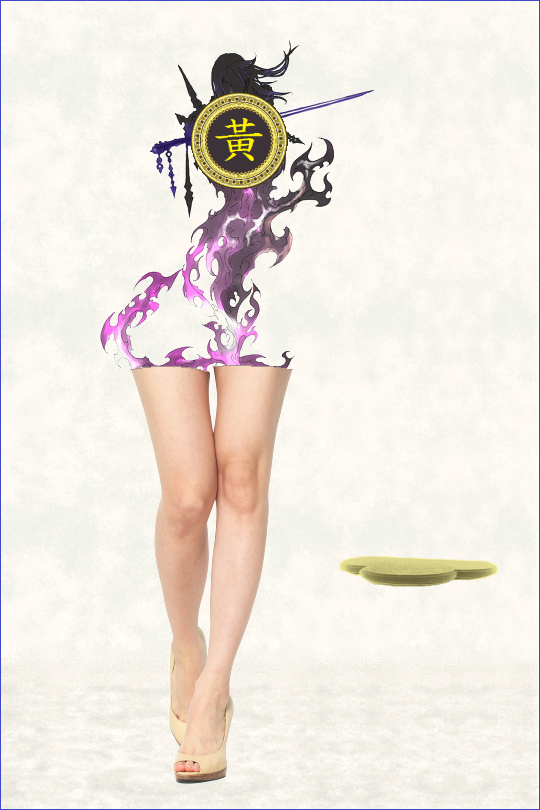 The karma was in the shape of the founder of the Taoyundao Huang family, Huang Jin-Fa (黃  金發, "golden-luck"). By the way,"Huang" means yellow in Chinese, and yellow also is the color of the gold. Huang Jin-Fa was such a man who was eager to succeed extraordinarily, he loved wealth, reputation, and superior social status. He dealt with supernatural beings with brutal attitude, and he treated his family members very strictly.

Just a pair of legs isn't proper to bear the karma of a family. The legs needed to be a person, a real person. The altered reality forced other parts of the person to form. A chest was needed to contain ambitions and desires of the Huang family; a belly was needed for refuging ghosts and spirits from the Huang family; and a head was of course a must, it can bear the Huang's histories and memories.

Finally, all of those things got themselves together, a lady was completely assembled. 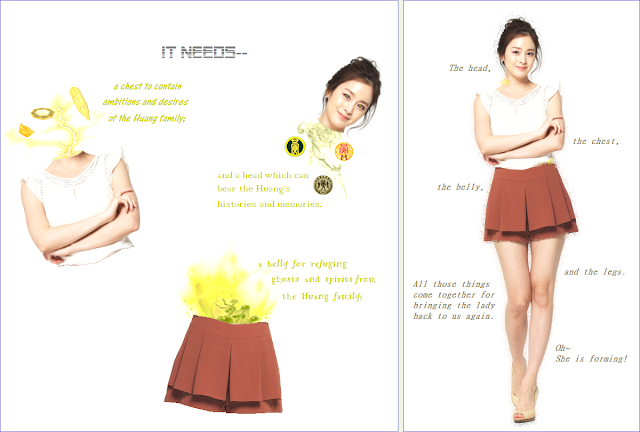